Boaz and I are moving to Amsterdam and I said I would tell you about it. I don’t speak Dutch but I listened to a four-minute podcast that taught me how to say “How are you?” and “Your sheep or mine?” Those phrases are not as useful as you would expect. Now click these if you want to: Sad Animal Facts Adorably depressing facts about your favorite animals It’s Different Every Day Boaz and I make a calendar that’s 313 calendars in one The Pedal Powered Talk Show Boaz’s talk show built into a bicycle built into the internet Header image: Judith Pushett and Kevin Irby

Here are three people I saw this week that I can’t stop thinking about.

This was a bald man wearing business clothes, smoking a cigarette, and standing by a bridge. He was talking to himself in a very serious voice while staring off into the water.

But it’s possible that the headset was turned off, and he was just quietly approving the canal.

Kale is Dutch for bald.

One intersection I bike through usually has workers standing there, fielding traffic.

The other day a man riding in front of me reached out to high five the construction worker. It looked so fun that I immediately reached out to do the same thing, but as I passed the guy pulled his hand down and wouldn’t high five me.

What do you make of this?

I’ve been thinking about it non-stop for three days.

I saw Rob and his girlfriend walking through the neighborhood where we work. I’m not sure where Rob is from but his girlfriend is American and she loves Amsterdam. There is so much to look at in Amsterdam.

But does Rob see it all? Is he looking?

“Rob, look!” said Rob’s girlfriend, pointing at, I don’t know, just one of the buildings on the street. It didn’t seem like much to look at.

“Look, Rob, look, look at that.” she said, pointing at another thing I guess.

I know it’s pretty unlikely that any of these people have been thinking about me this week. But I hope one of them is, and I hope it’s that construction worker. I’m a safe and confident biker. I obey the rules of the road that I understand. My hands were clean, pretty clean anyway. I’m a great person to high five.

Beth took this photo of us.

A few weeks ago I was alone at a bagel restaurant, looking at a gallon-sized glass dish of loose candy that was just there for people to eat while they waited, when I heard my mom’s voice. My mom was supposed to be on the other side of the world still asleep, but in the bagel restaurant in Amsterdam I heard a voice that was unmistakably hers from across the room:

“Dude, with soccer you meet people who are die-hards for their team and I’m like, what team even is that.”

I turned around and to my surprise the voice didn’t belong to Susan, but to a college student in Amsterdam on vacation. This happens a lot.

Growing up I loved a book called Are You My Mother, about a baby bird that thinks everything is its mom. What an incredibly dumb bird, was I think the message. Who would think everyone was their mom? To clarify, I don’t think everyone is my mom. I just think everyone with American accents is my mom. Men, women, children, groups of teenagers, lots of sunburned young women on vacations living their best life: I hear what I’m sure is her voice about once a week.

It seems like almost everyone speaks English here, but the American voices stand out. If there were someone with an American accent talking casually about bus schedules standing next to someone yelling my name into a megaphone, I’d probably notice the American accent first.

I took two handfuls of the candy (that’s fine right? It was just there in a huge jar) and sat closer to the Americans so I could listen to their voices. There were five of them, all college-aged and wearing jeans and polos.

“Can you believe we’re here?” One of the boys in polos asked.

One of his friends in polos confessed that he hadn’t told his parents where they were going, and for all they knew he was at a friend’s house in Connecticut.

Another boy in a polo said that his parents knew he was in Amsterdam — but they didn’t know about the red light district.

“The red light district is sort of Amsterdam’s best kept secret, bro.” he said in my mom’s voice, and his friends nodded in agreement.

In Portland our friends have a dog named Frankie who is about the size of a lunchbox, and it’s fun to watch her interact with other dogs, especially very big ones. We’ll sit and watch them smell each other, and we’ll whisper “Do they even know they’re both dogs?”

I thought about this as I looked at the five boys in polos. Do they even know?

Would any of them guess that the woman at the next table, the one who ate four handfuls of loose candy and then left, likes their voices because they remind her of the voice she heard in the womb? Or am I just another one of Amsterdam’s best kept secrets?

If someone had asked me yesterday what my personal hell would be, I wouldn’t have known off the top of my head.

It seems like an easy enough question to answer – but those are the questions that are hardest to answer.

How many beans can you hold in your hand? No one’s ever asked me that, but tell me the type of bean and I can make a good guess.

What’s the capital of Ohio? I would probably think of it eventually. Those kinds of questions are fine.

But questions about yourself are tricky.

Answers to the questions about yourself are like feral cats, they sneak up on you when you’re alone and least expect them. And they rub against your jeans and you wonder why, and then you’re nervous to smell your jeans later. 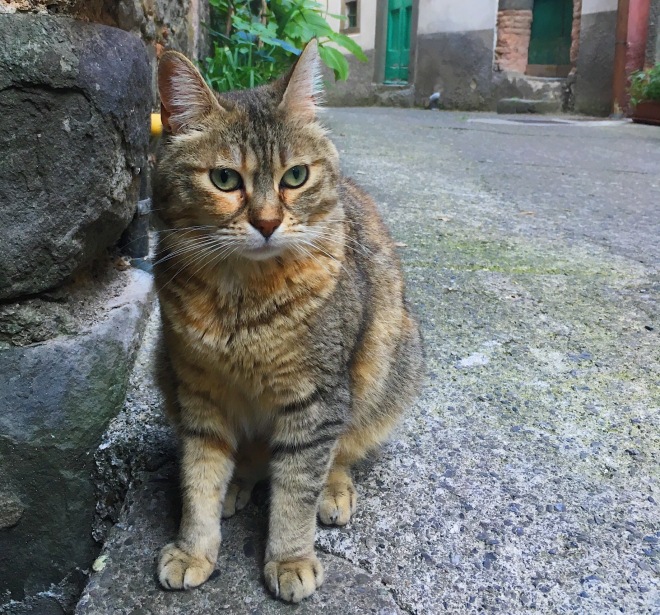 That’s why if someone had asked me yesterday about my personal hell, I probably would have just described the average personal hell. Maybe very loud construction, or being in a cab and realizing you don’t have enough money to cover the fare.

Last night I learned what my actual hell is because we had to try to sleep through it: constant daylight.

People talk a lot about the length of days in Amsterdam, and they complain about the short ones. They complain about how in the winter it’s dark all the time. Bring on darkness. I go to the movie theater and pay ten euros to sit in darkness. No one is paying ten euros for constant light, but here in the summer you get it for free whether you like it or not.

Last night I took a ton of cold medicine and got in bed ready to welcome sleep but the sun was still out, and there was daylight deep into the night until pretty much forever, until somehow it started getting even brighter. Then we called it morning and I got out of bed and changed from pajamas to work clothes and went to work with people who all witnessed the same thing, and we’re all pretending it didn’t happen.

There was no night last night. Can it even be morning if it wasn’t night? How do we know today is today and not still yesterday? How did anyone sleep? This doesn’t bother anyone else. And that’s what makes it a personal hell, I guess.

So, if you were going to ask, now you know.

Here’s a photo of a pigeon unsatisfied by the things it found in the trash:

I don’t remember why I looked up reviews of our thermostat and then used Google Translate to read them, but I’m so glad I did because they turned into beautiful robot poems about broken thermostats. Here I’m pasting my three favorites.

Regret, regret, regret. We have now a year in use and, indeed, a huge decline compared with our old thermostat.

At that time “forgets” the boiler.

Well, he further plans nothing. I hung him back today.

I have now a few weeks of use. At least half of the time I can not connect what is excellent:

Weekly schedule includes regular way, and must be reset.

Manuals do not go, then, if nothing happens, everything stops.

Try again weeks to connect, in one way or another, Nothing Works.

In short, do not know what to do.

The worst part is that you can Never get your story. Worthless

every week, sometimes the connection lost.

If you do not Watch and gateway not again (power off of ten second setback) time starts, deviates from weekly program.

I can not, all but nothing teach. Could at least be.